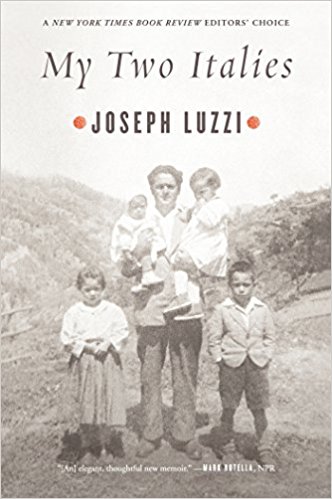 SKU:
$14.00
$14.00
Unavailable
per item
A charming, informative personal history that blends the anecdotal, historical, and downright unusual
The child of Italian immigrants and an award-winning scholar of Italian literature, Joseph Luzzi straddles these two perspectives in My Two Italies to link his family's dramatic story to Italy's north-south divide, its quest for a unifying language, and its passion for art, food, and family.
From his Calabrian father's time as a military internee in Nazi Germany--where he had a love affair with a local Bavarian woman--to his adventures amid the Renaissance splendor of Florence, Luzzi creates a deeply personal portrait of Italy that leaps past facile clichés about Mafia madness and Tuscan sun therapy. He delves instead into why Italian Americans have such a complicated relationship with the "old country," and how Italy produces some of the world's most astonishing art while suffering from corruption, political fragmentation, and an enfeebled civil society.
With topics ranging from the pervasive force of Dante's poetry to the meteoric rise of Silvio Berlusconi, Luzzi presents the Italians in all their glory and squalor, relating the problems that plague Italy today to the country's ancient roots. He shares how his "two Italies"--the earthy southern Italian world of his immigrant childhood and the refined northern Italian realm of his professional life--join and clash in unexpected ways that continue to enchant the many millions who are either connected to Italy by ancestry or bound to it by love.


The American-born son of poor but tough Calabrian immigrants, Luzzi yearned for the Italy of Dante and Michelangelo, not the one of sharp cheese and salted anchovies. But while building a distinguished scholarly career writing about Italian high culture, the very different Italy of his parents continued to haunt him with the smells of its cooking, the calloused hands of his uncles, and the unsentimental way in which his mother dispatched animals for the family table. Luzzi is not, of course, the first to note the distance between these two Italies—as he notes, Tony Soprano grappled with the same issue—but the contrasting ideals provide Luzzi with a lens through which to examine Italy and the Italian American experience, especially that of his family. In part, he is trying to puzzle through the miseria of his parents, who survived the war to suffer a lifetime of backbreaking labor and enduring but pugnacious love. But when Luzzi shares his deepest pain—the sudden death of his pregnant wife in a car accident—his investigations of his extended family turn powerfully poignant, for it was they who cared for his infant daughter while he curled in a fetal position in his childhood bed. The result is a memoir that balances thoughtful observation with feelings that, one senses, still remain quite raw. --Brendan Driscoll --This text refers to an out of print or unavailable edition of this title.

Review
“My Two Italies [is] a brilliant tour de force that is part memoir, part cultural criticism and part paean to the magical city of Florence. A narrative at once elegant and elegiac, the book encapsulates the essence of contemporary Italy--sordid politics, organized crime, the bella figura--in a fast-paced prose that rushes by much too quickly.” ―Arlice Davenport, Wichita Eagle
“In his elegant, thoughtful new memoir, My Two Italies, [Joseph Luzzi] writes of watching his father and uncle carve up an entire goat, make wine, and hold a meeting of brothers to determine the fate of an uncle's unfaithful wife. And this was not 19th-century Calabria, but Rhode Island in the 1970s . . . In this relatively slim book, Luzzi effectively covers lots of ground on Italian identity as a whole: the concept of mammoni (40-year-old Italian men who live with their mothers), Italy's Slow Food movement, and a somewhat dutiful examination of the country's politics since World War II. On Americans of Italian descent, he writes ‘we Italian Americans suffer from a form of cultural schizophrenia, half of our soul nourished by centuries of European arts and letters,' while the other half is ‘contaminated' by The Godfather and The Sopranos. But Luzzi can be heartbreakingly tender, as when he recalls his pregnant wife, who was hit by a car and died just after his daughter was delivered. It's only a few passages, but it is amazingly affecting. His daughter is now four years old; at bedtime he reads to her and tells her stories, for ‘stories will be all that binds her to Calabria.' And when he travels to Florence now, without his wife, Luzzi considers yet another two Italies: ‘the Italy of the living and the dead.' As for his own sense of being an Italian American, he strikes a bittersweet chord: ‘We commemorate our past only to remind ourselves how far we have traveled from it.'” ―Mark Rotella, NPR
“My Two Italies touches, lightly and elegantly, on politics, history, geography, sociology, language, literature, film, food and family . . . [There are] deeply felt stretches of memoir.” ―Craig Seligman, The New York Times Book Review