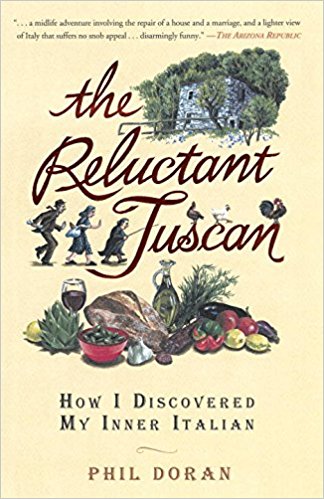 SKU:
$14.90
$14.90
Unavailable
per item
After years of working on a string of sitcoms, Phil Doran found himself on the outside looking in. Just as he and his peers had replaced the older guys when he was coming up the ranks, it was now happening to him. And it was freaking him out. He came home every night angry, burned- out, and exhausted. After twenty-five years of losing her husband to Hollywood, Doran’s wife decided it was finally time for a change—so on one of her many solo trips to Italy she surprised her husband by purchasing a broken-down 300-year-old farmhouse for them to restore. The Reluctant Tuscan is about the author’s transition from being a successful but overworked writer-producer in Hollywood to rediscovering himself and his wife while in Italy, and finding happiness in the last place he expected. In the witty tone that made him a success as a writer in Hollywood, The Reluctant Tuscan captivates those who simply love a good travel narrative as well as anyone who loves the quirky humor of Bill Bryson, Dave Barry, and Jerry Seinfeld.

From Publishers Weekly: Readers of Doran's amusing memoir about relocating from Los Angeles to the tiny Tuscan town of Cambione must first suspend their disbelief that a person in his right mind would actively resist such an opportunity. But resist Doran does—and when his sculptor wife buys a ramshackle, 300-year-old house there on a whim, she must drag him kicking and screaming out of his high-stress, low-reward life as a Hollywood writer and producer (among his hits: Who's the Boss? and The Wonder Years). What follows is rather predictable: the house turns out to be in even worse shape than anyone imagined, and the construction crew has no "discernable pattern" when it comes to showing up for work. Lines like "Things happen in Italy that don't happen anywhere else on earth. A magical friendliness is spread all over the place like pixie dust" don't do much to distinguish Doran's story from other books of its ilk, but the author's grudging optimism and dead-on ear for dialogue certainly do. Doran's brutally funny accounts of tangles with everyone (including the mayor, the police, an inefficient landlord and Doran's long-suffering wife) are enough to keep readers hooked until the last page. It may not be a surprise that he lives happily ever after, but how he gets there is certainly worth the ride.
Copyright © Reed Business Information, a division of Reed Elsevier Inc. All rights reserved. --This text refers to an out of print or unavailable edition of this title.

From Booklist: In funny, breezy, offhand prose, yet one more American discovers the pleasures and pains of restoring a superannuated, bucolic Tuscan dwelling. A writer-producer of television series, Doran moves from Los Angeles to Tuscany at the behest of his interior-decorator wife and begins to live out his own Italian-inflected version of Green Acres. Having been suborned into purchase of Tuscan real estate that no right-thinking Italian would dream of buying, Doran gradually succumbs to the Tuscan lifestyle of constant wondrous meals punctuated with siestas. The taste of a grape and a plate of local pasta weave increasingly tight bonds about him. Despite civic opposition to his wife's road-building efforts and the locals' endearingly duplicitous dealings with them, Doran finds himself drawn to all the sensuous pleasures Tuscany offers. Doran has an eye for the telling personal detail, and he knows how to set up a scene for maximum comic impact. This well-crafted book could easily pass for a television series treatment. All that is missing is a laugh track. Mark Knoblauch