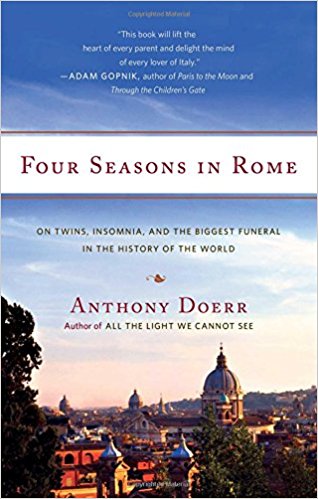 Four Season in Rome: on twins, insomnia, and the biggest funeral in the history of the world

SKU:
$14.99
$14.99
Unavailable
per item
From the author of the acclaimed Pulitzer Prize-winning #1 New York Times bestseller All the Light We Cannot See, a "dazzling" (Azar Nafisi, author of Reading Lolita in Tehran) memoir about art and adventures in Rome.

Anthony Doerr has received many awards—from the New York Public Library, the National Endowment for the Arts, and the American Library Association. Then came the Rome Prize, one of the most prestigious awards from the American Academy of Arts and Letters, and with it a stipend and a writing studio in Rome for a year. Doerr learned of the award the day he and his wife returned from the hospital with newborn twins.

Exquisitely observed, Four Seasons in Rome describes Doerr's varied adventures in one of the most enchanting cities in the world. He reads Pliny, Dante, and Keats -- the chroniclers of Rome who came before him—and visits the piazzas, temples, and ancient cisterns they describe. He attends the vigil of a dying Pope John Paul II and takes his twins to the Pantheon in December to wait for snow to fall through the oculus. He and his family are embraced by the butchers, grocers, and bakers of the neighborhood, whose clamor of stories and idiosyncratic child-rearing advice is as compelling as the city itself.

This intimate and revelatory book is a celebration of Rome, a wondrous look at new parenthood, and a fascinating story of a writer's craft—the process by which he transforms what he sees and experiences into sentences.


From Publishers Weekly. Acclaimed novelist and short story writer Doerr turns out a well-observed chronicle of his family's year in Rome, when he was a fellow at the American Academy of Arts and Letters. Doerr is a precise, lyrical writer who, dividing his book into seasons, captures in equal measures the wonder of the Italian countryside, the mind-boggling history of the Eternal City and the measured joys and trials of parenting twin baby boys. Upon their autumn arrival, it is the boys who most connect Doerr and his wife to their new city: "Grown men in suits stop and crouch over the stroller and croon. Older men in particular. Che carini. Che belli. What cuties. What beauties." In Spring, Doerr captures well the color and emotionof the vigil for the dying Pope John Paul II, providing insight into the man and his death: "More than three miles of artwork hang in the Vatican Museum and the pope could have any of it brought in front of him...Instead, he wants only to hear something read from the Bible in Polish." The memoir is full of other such rewarding passages, and anyone with fond memories of Rome will want to savor it slowly. Illustrations.

From Booklist. The recipient of an American Academy fellowship, Doerr, his wife, and their twin newborns are on their way to Rome for a year. Cultural isolation, the death of John Paul II, struggles to complete a novel, and the tales of first-time parenthood uniquely blend together as Doerr meanders his way through a one-year Roman holiday. Along the way, he meets Romans quick to praise his twins, Romans quick to prejudge an American, and Romans happy to share the secrets of their city with him. Set against this backdrop, Doerr finds it difficult to focus on the novel he plans on writing; instead, like so many other visitors, he falls for the Eternal City. For readers who have been to Rome, Doerr's reflections will leave them longing for a return trip. For those who have not, Doerr's stories of piazzas and pizzas will have them checking travel arrangements. Either way, this memoir is a wonderful combination of a writer's two dominant struggles: cultural identity and family. Blair Parsons
1 available
Add to Cart