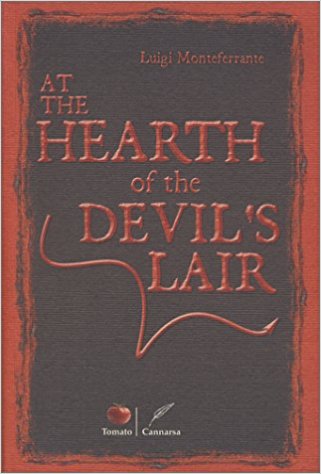 At the hearth of the devil's lair

SKU:
$13.90
$13.90
Unavailable
per item
Canada's greatest unknown composer, Maddalo McCannuck makes his living by digging holes in the ground at the archaeological site of the Devil's Lair, in Italy. After twenty years of passionate studies, Mad McCannuck finds himself alone, his wife gone, no friends, thousands of old records and a handful of debris. Until one day, the unexpected happens. A daughter born of his one great love, a college girl whose existence was a secret, comes looking for her dad. McCannuck is not himself. Is he prepared to dig up the past? Can he reveal himself, show her what he really is: a mad composer, an idealist, a loner, a loser? Must he become the enchanting story-teller of the Devil's Lair? While piecing together the scattered fragments of a mosaic, his past, McCannuck struggles to find his greatest treasure in his true and native land: a family, a home.

Review
He Just Reads & Scoots Montreal-born author now calls Italy home. There doesn t seem much that Montreal-born author Luigi Monteferrante has failed to to jam in his 40 years. But this fall, the eccentric self-styled literary man has surpassed even his typically high level of ingenuity, creativity and chutzpah. After stopping in Montreal to see family and to read from his just-published novel, At the Hearth of the Devil s Lair, he took off for Toronto to pick up a Vespa. He plans to go from city to city, reading to reading, on the famous Italian scooter first seen on the road in 1946. Montreal, Toronto, Chicago, Washington, D.C., and the U.S. Naval Academy in Annapolis, Md., are just some of the scheduled stops on his Vespa-book-tour. Reading from At the Hearth of the Devil's Lair. He borrowed the idea from the 1994 award-winning Italian film Caro Diario (Dear Diary). In that film, Italian film director Nanni Moretti embarks on a journey of self-discovery as he tours Italy on a Vespa. A Vespa is like a time machine, said Monteferrante. I shall be exploring my past and, perhaps more exciting, riding through the byways and routes I ve never taken before. The past is a place, a place like a maze; in one passage, what was; in another, what might have been. He first rode Vespas as a Canadian teenager spending summer holidays in the Italian village of Vasto Marina, where his parents were born and where he now lives, he says. Bed & Breakfast & Books & Beaches Moving forward, looking back. Riding it will take me back over 20 years. His Italian parents immigrated to Canada in the 1950s and he grew up in Lasalle. He attended Lasalle Catholic Comprehensive High School and studied Social Sciences at John Abbott College. In 1984, after the Classics & Philosophy Program at Concordia, he dropped out and headed to Italy to write the Great Canadian Novel. It took longer than I thought. He has taught English as a second language to pay the bills as he wrote. And with his wife Tiziana, Luigi has operated a B & B in his seaside home: Villa Monteferrante. For the past few summers, as beach-loving Italians flocked to the Adriatic coast and his village, he has packed his bags for Ireland and the U.K. I think it s my character traits that have forged my lifestyle, he said. I write, I write all day. I ride motorbikes, I ride hard. I read, I read for five days straight without ever getting out of bed. As a kid, I read Anna Karenina in two days. Writing his first novel, he said, required that same kind of stick-to-it spirit. In fact, he stopped teaching for a time and concentrated on writing and rewriting. When he was done, he said, there was no time to waste. Now, he said, it s time to hit the road. I want to breathe life from the wide expanses I shall be traveling across on my lovely little Vespa. --Montreal Gazette Article published October 21, 2002 by Cheryl Cornacchia.