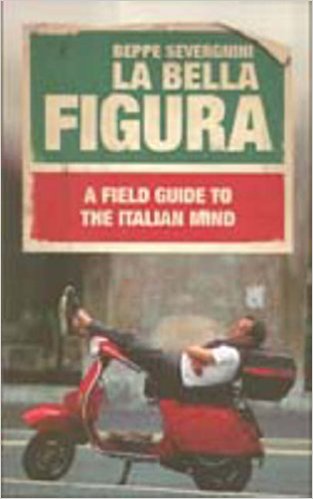 La bella figura: an insider's guide to the Italian mind

SKU:
$13.00
$13.00
Unavailable
per item
*USED
You won’t need luggage for this hypothetical and hilarious trip into the hearts and minds of Beppe Severgnini’s fellow Italians. In fact, Beppe would prefer if you left behind the baggage his crafty and elegant countrymen have smuggled into your subconscious. To get to his Italia, you’ll need to forget about your idealized notions of Italy. Although La Bella Figura will take you to legendary cities and scenic regions, your real destinations are the places where Italians are at their best, worst, and most authentic:

The highway: in America, a red light has only one possible interpretation—Stop! An Italian red light doesn’t warn or order you as much as provide an invitation for reflection.

The airport: where Italians prove that one of their virtues (an appreciation for beauty) is really a vice. Who cares if the beautiful girls hawking cell phones in airport kiosks stick you with an outdated model? That’s the price of gazing upon perfection.

The small town: which demonstrates the Italian genius for pleasant living: “a congenial barber . . . a well-stocked newsstand . . . professionally made coffee and a proper pizza; bell towers we can recognize in the distance, and people with a kind word and a smile for everyone.”

The chaos of the roads, the anarchy of the office, the theatrical spirit of the hypermarkets, and garrulous train journeys; the sensory reassurance of a church and the importance of the beach; the solitude of the soccer stadium and the crowded Italian bedroom; the vertical fixations of the apartment building and the horizontal democracy of the eat-in kitchen. As you venture to these and many other locations rooted in the Italian psyche, you realize that Beppe has become your Dante and shown you a country that “has too much style to be hell” but is “too disorderly to be heaven.”

Ten days, thirty places. From north to south. From food to politics. From saintliness to sexuality. This ironic, methodical, and sentimental examination will help you understand why Italy—as Beppe says—“can have you fuming and then purring in the space of a hundred meters or ten minutes.”


From Publishers Weekly
Severgnini—Italian newspaper columnist and author of the pesce-out-of-water memoir Ciao, America!—must have wanted to emulate Luigi Barzini, author of the 1960s classic The Italians, in this somewhat tepid sociological look at his countrymen. Severgnini writes pleasantly enough (and Giles Watson's translation is smooth, for the most part), but his observations are anything but sharp. He organizes this overview as a kind of geographical "tour," with a chapter about car sex in Naples and another on the Italian countryside in Tuscany. Sweeping statements, such as "Italians have the same relationship with food that some Amazonian people have with the clouds in the sky—one glance and we know what to expect," abound, and they have the ring of truth, but they're rarely backed up by supporting anecdotes. In today's shrunken world, jokes about how Italians love to see half-naked women on television ("The new Italian icon is the Semi-Undressed Signorina") and abuse their cellphone privileges simply aren't new. The collection ends with the hoariest of devices: a letter from an imaginary American friend who has taken Severgnini's tour and reminisces about the beautiful "girls" in a Milan disco. Barzini, too, often wrote in generalities, but he had the advantage of coming first. (Aug.)